The day I converted from atheism is approaching… 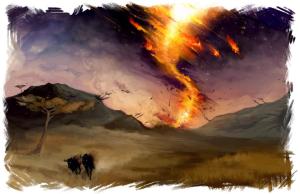 I spruced up the old testimony for Brian Auten’s Former Atheist Project on Apologetics 315, just in time for my approaching born-again birthday.  If you’re a former atheist, Brian would love to hear your story–and so would I :)  Mine begins here…

Before I became an atheist, I had grown up in church, a preacher’s kid who prayed to receive Christ when I was four. I never matured beyond the Sunday school understanding of avoiding the punishment of hell and gaining the reward of heaven.  There were lots of questions my parents did their best to answer, but many questions lingered after I got married and moved away from home.

When we bought a computer, I used it to witness in chat rooms and message boards, even met a few times in person with one of the people to whom I was witnessing.  In the process I discovered people have a lot of doubts about Christianity, and I added those doubts to my own.

I remember the night when the scales tipped and my doubts outweighed my faith – I had a nightmare that I rode in the passenger seat of a car speeding through a hilly stretch of road and could not make the driver slow down. I woke up terrified as the car launched off a cliff into the blackness of night.  The grounding of my faith gave way to an abyss of nothing.  It didn’t kill me, but it didn’t make me stronger, either.  The abyss provides no ground for meaningful strength.

I lived as a lost, prodigal sheep for about five years.  Emotionally I abandoned my family, paying as little attention to them as I could get away with, and invested all my spare time in online philosophy message boards. I did a lot of selfish things I rationalized were okay at the time, as long as no one knew.  Now I regret those things.  They caused pain and left scars.  I learned that nothing genuinely good needs to be hidden.  Really, I knew that, but I ignored what I knew, and God gave me over to delusional thinking.  I remember with sadness even the happy memories during that time, because they are all colored with the full reality of what I hid.

By the time He brought me back to Himself, I no longer thought about God.  I didn’t think a God existed to think about.  I felt apathetic about life. I taught my kids that believing in God was like believing in the Easter Bunny, Santa Claus, and the Tooth Fairy. My still-believing husband and I butted heads over my stand.

The nagging question of why something exists instead of nothing needled me. It bothered me because I couldn’t answer it, not because I thought an answer exists.

Finally I tired of lying to my husband and stopped doing things I had to hide, hoping my marriage would improve.  I became a zombie.  I merely existed, and would’ve continued that way if God had not intervened. I wished I could believe like my husband believed, to make our marriage go more smoothly, but I couldn’t.  I couldn’t believe something for which I felt there was no evidence.

It all became real on September 22, 2005, when God smacked me upside the head. I am leaving out details no atheist would believe unless they experienced them, but He influenced me to tell my husband everything I had ever done.  It felt like I threw my whole marriage and our parenting up in the air and trusted God to catch it and help it all land safely on the ground.

It turned out my husband had broken down and prayed two days before that I would find God and our lives would get straightened out. He already knew I wasn’t completely present in our marriage, and when I told him the truth, he wanted to leave, but God put it on his heart to stay.

Besides guiding me to tell my husband the truth that day, God helped me quit smoking and let go of other addictions. Life wasn’t all sunshine and roses—things got much worse before they got better, but God was on our side and carried us through the storm of insanity. I refer to it sometimes as the fiery whirlwind. God broke me, sifted me and refined me.

He made His saving love real to me by offering me His hand and giving me the choice to be saved out of the mud when I still wallowed in it.  The transformation God brought about in my life helped me and my husband go from the nightmarish brink of divorce, to best friends in love all over again, united in our faith.  He helped me gradually restore the intimacy mothers are supposed to share with our children.

After Jesus made himself real to me, I decided I wanted to actually look into the evidence, rather than chant the mantra still heard from atheists today, that “there is no evidence”.  I’ve been involved in apologetics ever since.  Now I teach my sons about arguments for God’s existence and evidence of Jesus’ resurrection.

Maryann Spikes is the past President of the Christian Apologetics Alliance. She blogs at Ichthus77, and loves apologetics and philosophy. In particular she loves to study all things Euthyphro Dilemma and Golden Rule. Formerly a para-educator (autism) for five years, she holds a Certificate in Christian Apologetics from Biola University, an AA in Humanities via Modesto Junior College, and moonlights as a freelancer on Upwork. You can follow her on Twitter @Ichthus77, connect with the Ichthus77 community on Facebook, or look her up on Google+.
View all posts by Maryann →
This entry was posted in Tim McGrew. Bookmark the permalink.

12 Responses to The day I converted from atheism is approaching…