Why does God allow sin? A bit of a different take.

This question was submitted by a woman via email in preparation for an apologetics discussion my sister and I held this past weekend at a women’s retreat hosted by Redeemer Modesto, our church home. 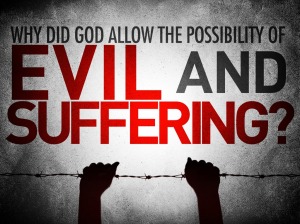 I want to share my answer here, because it is a bit different from the usual answer you encounter when you study apologetics. It does not require taking the Fall narrative in Genesis literally, and allows for (but does not require) theistic evolution. We all agree that things are messed up, even if we don’t take the Fall narrative literally. Unlike what you normally encounter, the answer below doesn’t blame all negative junk on the Fall, nor promise that Heaven will be pain-free.

The question, “Why does God allow sin?”, is part of a bigger problem called the problem of evil — both moral evil, and things like natural disasters. Basically, the objection is that God doesn’t exist, because evil would not exist if there is a God who is good enough to want to stop it, and powerful enough to be able to stop it.

The following answer is not going to help someone who is currently suffering through a seriously hard time in their life. Someone in the middle of suffering needs love and warmth, not dry intellectual arguments.

Pain did not start at the Fall, so we can’t say that if we had never sinned, there would be no pain. God knew what was coming and still chose to say, “Let there be light” (Big Bang or otherwise). So God knew pain before the first sin. [Side issue: Pain is not always punishment. Yes, sometimes God uses pain to get your attention, but it should not be automatically assumed that’s what he is doing. Luke 13:1-5]

And yet, all major cultures throughout history have acted as if we are truly obligated to follow it, and are truly bothered when we don’t. We all have the sort of hunger that only Golden Rule love meaningfully fulfills. Does our having evolved a hunger for physical nutrients suggest that nutrients don’t actually exist? Quite the opposite.

So when atheists, or even doubting Christians, say evil is an obstacle blocking them from belief in God (or trust in God), they reflect a hunger for Golden Rule love, they acknowledge the evil in the world is starving that hunger, but they fail to acknowledge the existence of a perfectly good being (God) that has to exist in order for evil to mess anything up–and for their hunger to truly be fulfilled.

In the midst of suffering, our trust in God is tested. But without the possibility of choosing painful alternatives, we will never know the depths of God’s love…a self-sacrificial love that persists despite all circumstances, including our own worst sins…a love he died to demonstrate.

That kind of love-despite-circumstances is worth every circumstance we could endure, like a treasure for which you give up everything so you can possess it instead (Matthew 13:44). That is not to say that God makes us endure some horrible, despicable evil beyond our control for the sake of some future treasure (see follow-up below). It is only to say that his love endures with us despite the most horrendous evil, and that he is faithful to bring good from even that. If he could not bring good from it, he would not have allowed it to happen. But the good may not be realized until we are with him in the “not yet” (1 Cor. 13:12, Hebr. 2:8-9, John 18:36, 1 John 3:2, Romans 8:28).

If in fact Jesus did not demonstrate the Father’s love by suffering for us on the cross and rising from the dead…if there is no treasure…then all suffering we endure would be in vain (1 Corinthians 15:14). He did demonstrate that love. Our suffering is not in vain (Romans 5:3-5, 8:17-18). That is good news.

2 Corinthians 7:4:
“I am filled with comfort. In all our affliction, I am overflowing with joy.”

Follow-up: I want to address the idea that God allows us to go through evil and suffering because he wants us to notice him, turn to him, and reflect his glory.

Many Christians say that God has a purpose and reason for every hard thing we go through. Some examples they use from the Bible include that God intended it for good that Joseph went through his junk, a man was born blind so the works of God might be displayed in him, and God causes all things to work together for good for those who love God. If we lose someone to cancer, they say something like, “God must have something planned for you that would have been impossible unless you went through this.” One of those planned things they often mention is that God wanted to get our attention so that we would turn to him, see his glory, repent, and reflect it. But these passages don’t necessarily say that. The first passage about Joseph can be translated to mean that God took a situation that was all-bad and turned it into a good one. The second passage about the blind man is true about everything in history, good or bad, and is more answering the loaded question, “Whose sin caused this bad consequence?” not “Why does God allow bad things to happen?” He’s saying nobody’s sin caused it. The third passage about God causing all things to work together for good – that doesn’t mean he can’t work good things unless bad things happen first. If that were true, he wouldn’t be perfectly good, because in order to be good he would have to be bad first. None of these passages say that God couldn’t have done something unless something else despicable happened along the way. They only say he can bring good out of the worst situation–and he ultimately will. Therein lies our hope.

To be okay with whatever a divine being could throw at you, because “the end justifies the means,” is to blindly trust what is potentially an evil being. God does not want evil for us. He does not make us go through evil, but he can and does redeem it. Read the rest of James 1 for the difference between the sort of things God will put us through, and the sort of things he won’t. Not *every* bad thing is something God wanted to happen–though there is not a single thing that happens that isn’t something he allowed to happen, being sovereign. If you only read the follow-up at this point, it’s time to start at the beginning ;)

This entry was posted in Apologetics, Golden Rule, Problem of Evil & Hell. Bookmark the permalink.

2 Responses to Why does God allow sin? A bit of a different take.